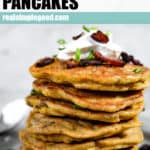 These four ingredient Paleo + keto bacon pancakes have me drooling for breakfast! Rich, savory and filling, you might not want to go back to regular pancakes ever again. Bacon pancakes sound too good to be true, but these fluffy, moist and salty pancakes are a savory Paleo + keto breakfast option! 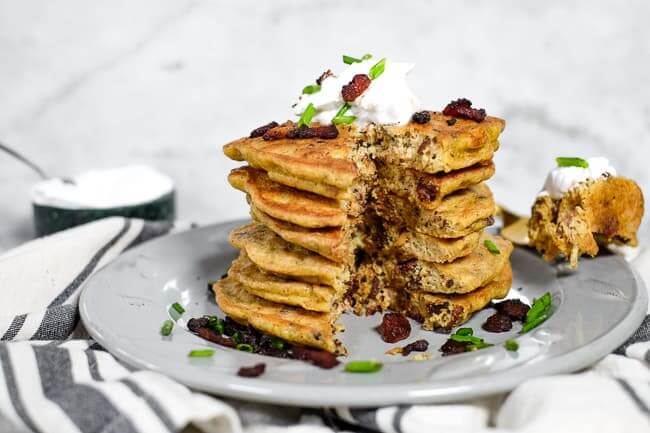 The best part about these bacon pancakes is how filling and savory they are. They are basically bacon and eggs morphed into pancake form so you get the idea. I love the savory, buttery flavor mixed in with the salty and crunchy texture of the bacon. If you use crunchy almond butter, you even get a little more crunchy texture in there! 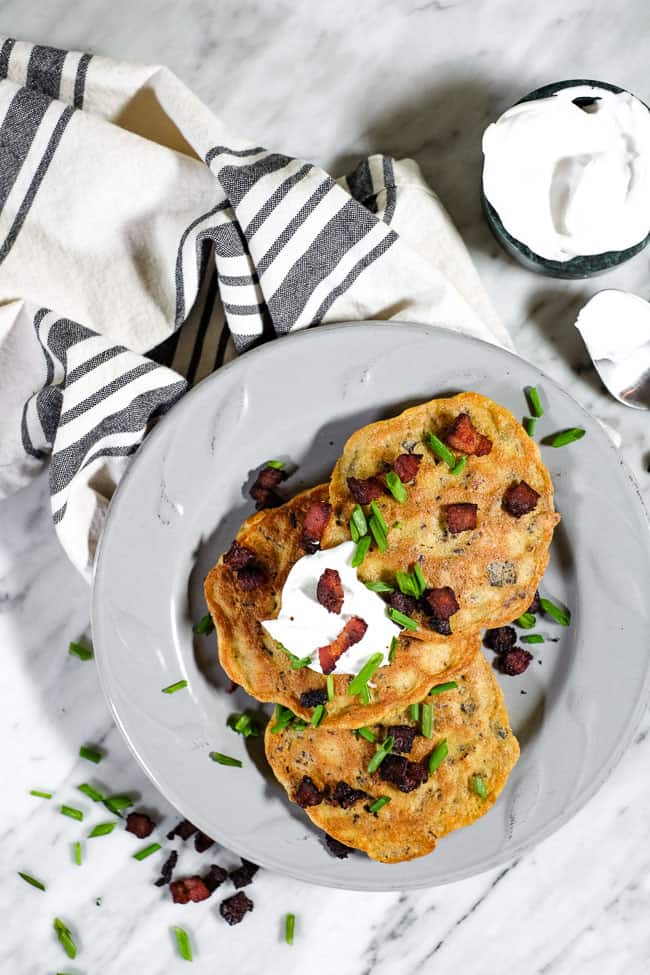 Have You Heard The Song?

In making this post I typed into Google the search term “bacon pancakes”. We don’t have kids so I wasn’t aware of an animated show called Adventure Time, which apparently has a song called “Bacon Pancakes“. Be warned, it’s totally catchy and will get stuck in your head so click over at your own risk! With that said, it’s an awesome song to listen to while making these bacon pancakes! 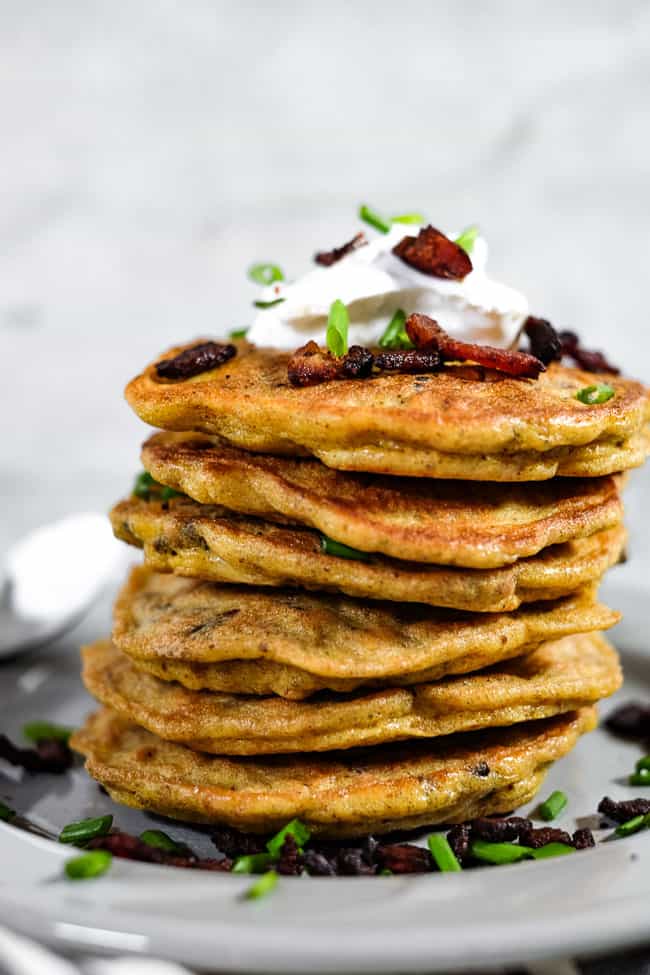 Since these are more on the savory side, I like to top them with some full fat greek or coconut yogurt and chives. The cool, creamy texture of the yogurt really pairs well with the hot and savory flavors of the bacon pancakes. You could also use full fat sour cream and chives instead of yogurt if you eat dairy. I’ve even added some hot sauce on top for good measure! Of course, if you are looking for a little salty-sweet combo you could always use a touch of maple syrup. 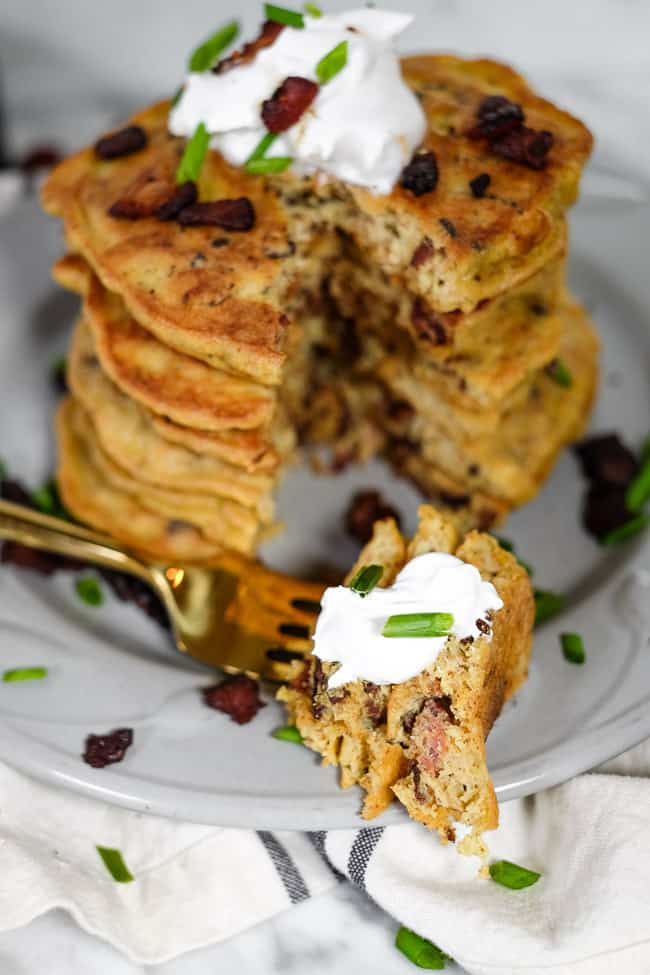 Some Other Low-Carb Breakfast Options

Your Turn To Make These Bacon Pancakes

Time to whip up a quick batch of these savory bacon pancakes! Get creative with the toppings and leave a comment below and let us know what your favorite toppings are for this recipe. Also, take a pic to share on Instagram! We love seeing what you guys make! Tag us @realsimplegood, and give us a follow if you don’t already! 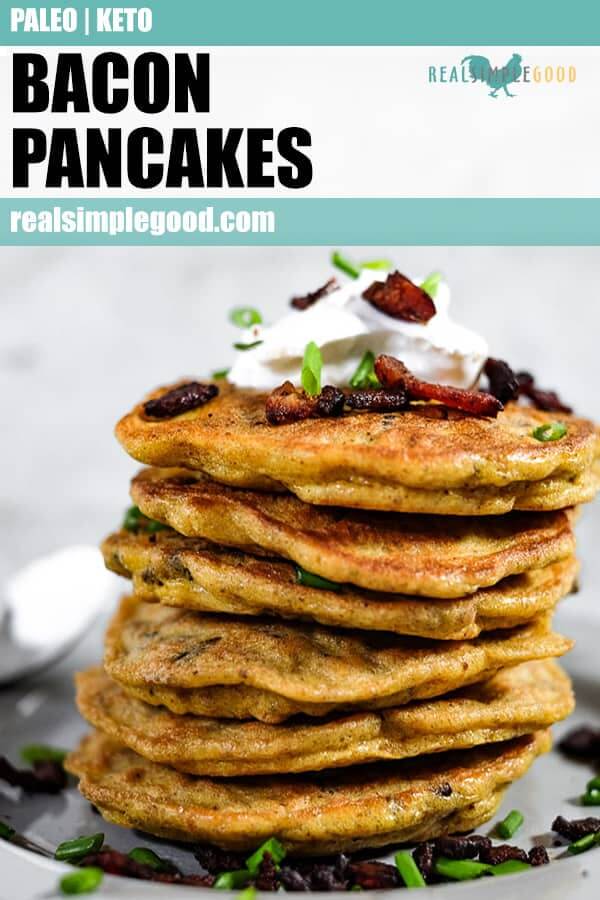 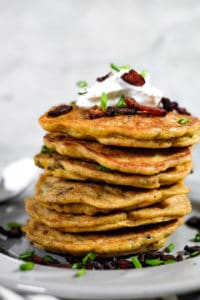 Recipe adapted from Mark's Daily Apple. Nutrition facts are an estimate provided for those following a Ketogenic or low-carb diet and do not include optional toppings for this recipe. See our full nutrition information disclosure here.

Hi, we are Justin and Erica! Former accountants turned real food and healthy lifestyle bloggers. We are here to help you live better.

Get our latest recipes and lifestyle tips delivered to your inbox. Let us help you create your own Real Simple Good Life, starting with a free one week meal plan!